The Titanic, arguably the most famous shipwreck of modern times, sits on the bottom of the Atlantic Ocean covered with two and a half miles of water – six tons of pressure to the square inch. Certainly that would be enough to keep its inhabitants confined, or, is it . . . ?

Before, during and after the disaster, there were a large number of paranormal experiences surrounding the Titanic’s maiden voyage. Some of these might have just been premonitions, but others are much harder to explain away. Esther Hart just knew that something was going to happen on this trip, so much so that she refused to sleep during the night, instead resting during the day and staying awake every night. When, on April 14, 1912, she felt the collision with an iceberg, she was vindicated. Hurriedly waking and rushing her family into their clothes, they dashed up on deck – but even so, the tragedy she feared came true when her husband Benjamin was unable to find a place in the lifeboats and died in the frigid water.

More intriguing was the case of a young girl named Jessie who lay dying on April 14 in Scotland. While laying in bed in a Salvation Army mission in Kirkcudbright, she called out “Hold my hand, Captain, I am so afraid. Can’t you see that big ship sinking in the water? – Look at all those people who are drowning. Someone called Wally is playing a fiddle and coming to you.” The man she was talking to was Rex Sowden, and he looked around the room but saw no one. As the young girl died, she said that her mother had arrived “. . . to take me to heaven.” Sowden suffered another loss the next day when he found out that the “unsinkable” Titanic had sank, killing Wally Hartley – the leader of the ship’s orchestra. Sowden had known Wallace Hartley as a boy but had lost track of him and didn’t even know he had gone to sea.

One of the Titanic’s first class passengers was W. T. Stead, a well-known writer and spiritualist. He had written an article in the Review of Reviews in 1892 in which a large ocean liner named the Majestic collided with an iceberg, sinking with only one survivor. The real captain of the Majestic at that time was E. J. Smith, who later became captain of the Titanic. Stead firmly believed that those in the afterlife could communicate with the living, and three weeks later, with his daughter Julia in attendance, appeared to a gathering of spiritualists in England. “Clearly he showed his face that all might see,” Julia said, and “. . . his voice rang through the room saying ‘all I told you is true. . .’”

These stories are just the tip of the iceberg when it comes to ghostly tales and paranormal experiences connected with the Titanic. Far from being an average ocean liner, the Titanic seems to have been surrounded by apparitions, curses and spirits; it’s hard to tell if they are all at rest.

On October 30, 2009, Titanic Branson is hosting a Halloween masquerade that will explore many of the strange and supernatural experiences that inhabit the Titanic’s story. Members of the museum’s staff will be talking about these and many other paranormal stories connected to the disaster, all the while surrounded by relics and artifacts owned by real Titanic passengers.

Several books have been written on this subject, but rather than sitting down with an ancient and dusty book, come and relive the other-worldly stories of the Titanic’s passengers and crew.

First Class passenger Edith Evans was warned by a fortuneteller to beware of the water – and she died a cold and agonizing death. Come and see what fate might await you . . . 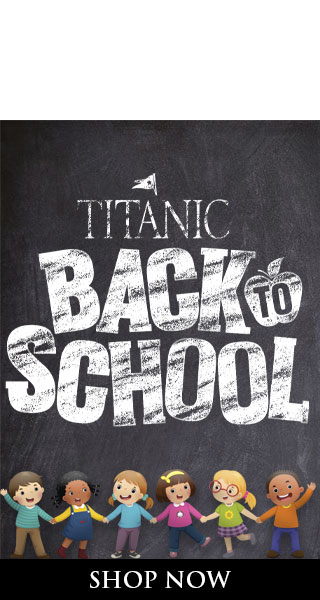